Cheaha provides users with a traditional command-line interactive environment with access to many scientific tools that can leverage its dedicated pool of local compute resources. Alternately, users of graphical applications can start a cluster desktop. The local compute pool provides access to compute hardware based on the x86-64 64-bit architecture. The compute resources are organized into a unified Research Computing System. The compute fabric for this system is anchored by the Cheaha cluster, a commodity cluster with approximately 2400 cores connected by low-latency Fourteen Data Rate (FDR) InfiniBand networks. The compute nodes are backed by 6.6PB raw GPFS storage on DDN SFA12KX hardware, an additional 20TB available for home directories on a traditional Hitachi SAN, and other ancillary services. The compute nodes combine to provide over 110TFlops of dedicated computing power.

Cheaha is composed of resources that span data centers located in the UAB Shared Computing facility UAB 936 Building and the RUST Computer Center. Resource design and development is lead by UAB IT Research Computing in open collaboration with community members. Operational support is provided by UAB IT's Research Computing group.

Cheaha is named in honor of Cheaha Mountain, the highest peak in the state of Alabama. Cheaha is a popular destination whose summit offers clear vistas of the surrounding landscape. (Cheaha Mountain photo-streams on Flikr and Picasa).

For information on getting an account, logging in, and running a job, please see Getting Started. 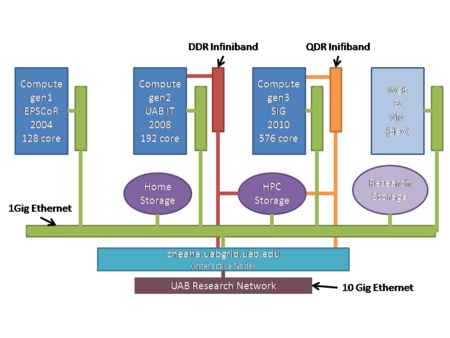 In 2002 UAB was awarded an infrastructure development grant through the NSF EPsCoR program. This led to the 2005 acquisition of a 64 node compute cluster with two AMD Opteron 242 1.6Ghz CPUs per node (128 total cores). This cluster was named Cheaha. Cheaha expanded the compute capacity available at UAB and was the first general-access resource for the community. It lead to expanded roles for UAB IT in research computing support through the development of the UAB Shared HPC Facility in BEC and provided further engagement in Globus-based grid computing resource development on campus via UABgrid and regionally via SURAgrid.

In 2008, money was allocated by UAB IT for hardware upgrades which lead to the acquisition of an additional 192 cores based on a Dell clustering solution with Intel Quad-Core E5450 3.0Ghz CPU in August of 2008. This uprade migrated Cheaha's core infrastructure to the Dell blade clustering solution. It provided a 3 fold increase in processor density over the original hardware and enables more computing power to be located in the same physical space with room for expansion, an important consideration in light of the continued growth in processing demand. This hardware represented a major technology upgrade that included space for additional expansion to address over-all capacity demand and enable resource reservation.

The 2008 upgrade began a continuous resource improvement plan that includes a phased development approach for Cheaha with on-going increases in capacity and feature enhancements being brought into production via an open community process.

In 2009, annual investment funds were directed toward establishing a fully connected dual data rate Infiniband network between the compute nodes added in 2008 and laying the foundation for a research storage system with a 60TB DDN storage system accessed via the Lustre distributed file system. The Infiniband and storage fabrics were designed to support significant increases in research data sets and their associate analytical demand.

In 2010, UAB was awarded an NIH Small Instrumentation Grant (SIG) to further increase analytical and storage capacity. The grant funds were combined with the annual investment funds adding 576 cores (48 nodes) based on the Intel Westmere 2.66 GHz CPU, a quad data rate Infiniband fabric with 32 uplinks, an additional 120 TB of storage for the DDN fabric, and additional hardware to improve reliability. Additional improvements to the research compute platform involved extending the UAB Research Network to link the BEC and RUST data centers, adding 20TB of user and ancillary services storage

In 2012, UAB IT Research Computing invested in the foundation hardware to expand long term storage and virtual machine capabilities with aqcuisition of 12 Dell 720xd system, each containing 16 cores, 96GB RAM, and 36TB of storage, creating a 192 core and 432TB virtual compute and storage fabric.

In 2013, UAB IT Research Computing acquired an OpenStack cloud and Ceph storage software fabric through a partnership between Dell and Inktank in order to extend cloud computing solutions to the researchers at UAB and enhance the interfacing capabilities for HPC.

UAB received a $500,000 grant from the Alabama Innovation Fund for a three petabyte research storage array. This funding provided a multi-petabyte GPFS parallel file system to the cluster which went live in 2016.

In addition to the compute, the GPFS six petabyte file system came online. This file system, provided each user five terabyte of personal space, additional space for shared projects and a greatly expanded scratch storage all in a single file system.

The 2015 and 2016 investments combined to provide a completely new core for the Cheaha cluster, allowing the retirement of earlier compute generations.

The following description may prove useful in summarizing the services available via Cheaha. If you are using Cheaha for grant funded research please send information about your grant (funding source and grant number), a statement of intent for the research project and a list of the applications you are using to UAB IT Research Computing. If you are using Cheaha for exploratory research, please send a similar note on your research interest. Finally, any publications that rely on computations performed on Cheaha should include a statement acknowledging the use of UAB Research Computing facilities in your research, see the suggested example below. Please note, your acknowledgment may also need to include an addition statement acknowledging grant-funded hardware. We also ask that you send any references to publications based on your use of Cheaha compute resources.

Description of Cheaha for Grants

UAB IT Research Computing maintains high performance compute and storage resources for investigators. The Cheaha compute cluster provides 2400 conventional CPU cores that provide over 110 TFLOP/s of peak computational performance, and 20 TB of system memory interconnected via an Infiniband network. A high-performance, 6.6PB raw GPFS storage on DDN SFA12KX hardware is also connected to these cores via the Infiniband fabric. An additional 20TB of traditional SAN storage. This general access compute fabric is available to all UAB investigators.

This work was supported in part by the National Science Foundation under Grants Nos. OAC-1541310, the University of Alabama at Birmingham, and the Alabama Innovation Fund. Any opinions, findings, and conclusions or recommendations expressed in this material are those of the authors and do not necessarily reflect the views of the National Science Foundation or the University of Alabama at Birmingham.

The hardware is grouped into generations designated gen1, gen2, and gen3 (oldest to newest). The following descriptions highlight the hardware profile for each generation.

Details of the software available on Cheaha can be found on the Cheaha cluster configuration page, an overview follows.

A brief summary of the some of the available computational software and tools available includes:

Cheaha is connected to the UAB Research Network which provides a dedicated 10Gbs networking backplane between clusters located in the 936 data center and the campus network core. Data transfers rates of almost 8Gbps between these hosts have been demonstrated using Grid FTP, a multi-channel file transfer service that is used to move data between clusters as part of the job management operations. This performance promises very efficient job management and the seamless integration of other clusters as connectivity to the research network is expanded.

Cheaha uses Bright Cluster Manager to report cluster performance data. This information provides a helpful overview of the current and historical operating stats for Cheaha. You can access the status monitoring page here (accessible only on the UAB network or through VPN).

Cheaha is a general-purpose computer resource made available to the UAB community by UAB IT. As such, it is available for legitimate research and educational needs and is governed by UAB's Acceptable Use Policy (AUP) for computer resources.

Many software packages commonly used across UAB are available via Cheaha.

Cheaha's intended use implies broad access to the community, however, no guarantees are made that specific computational resources will be available to all users. Availability guarantees can only be made for reserved resources.

Please configure you client secure shell software to use the official host name to access Cheaha:

Slurm is a queue management system and stands for Simple Linux Utility for Resource Management. Slurm was developed at the Lawrence Livermore National Lab and currently runs some of the largest compute clusters in the world. Slurm is now the primary job manager on Cheaha, it replaces SUN Grid Engine (SGE) the job manager used earlier.

Slurm is similar in many ways to GridEngine or most other queue systems. You write a batch script then submit it to the queue manager (scheduler). The queue manager then schedules your job to run on the queue (or partition in Slurm parlance) that you designate. Below we will provide an outline of how to submit jobs to Slurm, how Slurm decides when to schedule your job, and how to monitor progress.

Operational support for Cheaha is provided by the Research Computing group in UAB IT. For questions regarding the operational status of Cheaha please send your request to support@vo.uabgrid.uab.edu. As a user of Cheaha you will automatically by subscribed to the hpc-announce email list. This subscription is mandatory for all users of Cheaha. It is our way of communicating important information regarding Cheaha to you. The traffic on this list is restricted to official communication and has a very low volume.

We have limited capacity, however, to support non-operational issue like "How do I write a job script" or "How do I compile a program". For such requests, you may find it more fruitful to send your questions to the hpc-users email list and request help from our peers in the HPC community at UAB. As with all mailing lists, please observe common mailing etiquette.

Finally, please remember that as you learned about HPC from others it becomes part of your responsibilty to help others on their quest. You should update this documentation or respond to mailing list requests of others.

You can subscribe to hpc-users by sending an email to:

You can unsubribe from hpc-users by sending an email to:

You can review archives of the list in the web hpc-archives.

If you need help using the list service please send an email to:

sympa@vo.uabgrid.uab.edu with the subject help

If you have questions about the operation of the list itself, please send an email to the owners of the list:

sympa@vo.uabgrid.uab.edu with a subject relavent to your issue with the list

If you are interested in contributing to the enhancement of HPC features at UAB or would like to talk to other cluster administrators, please join the hpc developers community at UAB.